PARADISE>> Camp Fire survivors are starting to move into Federal Emergency Management Agency housing in Paradise this week. FEMA is leasing out 25 travel trailers and mobile homes at two locations in private commercial parks in Paradise. People started moving in on Monday. There might be more FEMA housing coming to the ridge later on, said Rebecca Kelly, a FEMA spokesperson, because of the high demand.

“As RV and commercial parks open up, we will seek to lease additional sites, because we’ve found that people are very sincere in their wish to return to Paradise,” said Kelly.

FEMA is keeping the locations of the two sites private because of its contracts with the parks. A temporary water tank has been installed at the site to supply clean water to residents. 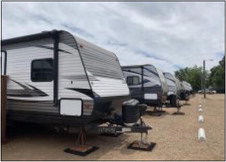 The Federal Emergency Management Agency is housing hundreds of Camp Fire survivors in travel trailers in Butte County, including 70units at the Silver Dollar Fairgrounds in Chico, pictured on Tuesday. People started moving in to the first units in Paradise this week.

Butte County has several other FEMA housing sites, though these 25 units are the first directly in the burn scar. Survivors moved into 60 FEMAtravel trailers at the Silver Dollar Fairgrounds in Chico earlier this month. In the Oroville area, there are around 70 trailers at Bidwell Canyon in the Lake Oroville State Recreation Area and 40 homes at Rosewood Estates on Mono Avenue.

FEMAwill get more temporary housing sites up and running later this summer, although the agency has scaled back because many survivors have found alternative temporary housing since the Camp Fire. About 80 manufactured homes will be going onto a parcel on Aztec Drive in south Chico this summer. The Gridley Industrial Park off Highway 99 will get around 400 homes.

The housing is scheduled to be available until mid-July 2020, unless California requests an extension. People living in FEMA housing meet with case managers regularly and show they are trying to find permanent housing.

Of the around 15,000 people who first registered with FEMA as wanting housing assistance, around 1,300 to 1,500 still say they would need a FEMA trailer or manufactured home, said Kelly. Many want to return home to the ridge, rather than relocating to another city or county.

Click here to see this page in the eEdition: