CHICO» Randy and Monica Zachary were asked to emcee the firstever Run For Food 5K, an event that has since become a staple of Thanksgiving mornings in Chico over the past 15 years.

The local radio personalities recalled that chilly Thanksgiving 2006 morning when people gathered to run at Bidwell Park to raise money for the Jesus Center, while the husband and wife team camped out on a flatbed pickup truck to entertain the crowd. 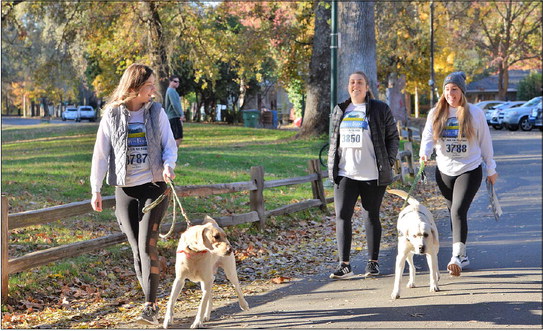 The annual Run for Food in Bidwell Park was a little different this year as it was a virtual event. Here, Taylor Cayton (left), Kiara Shuster (middle) and Sarah Diduca (right) along with their dogs, get ready to start their run. 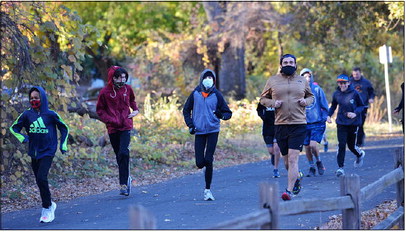 Thousands of people put Thanksgiving morning to good use all over Chico, with some participating in the Run for Food and others just enjoying a nice job in the park.

“It was so cold you could see our breath. I felt I didn’t have enough warm clothes on, huddled around a coffee cup,” Monica said. “And even though it was that cold, it was so much fun.”

“There were about 1,000 folks, I think, and it was amazing,” Randy said. “To be able to stand on that flatbed truck trailer thing, and just kind of entertain the troops and then have them kick off, it was very, very good.”

On Thursday, the two were again kicking off the event, albeit in a different format. As a result of the COVID-19 pandemic, there was no gathering at Bidwell Park, no armto- arm starting line with people taking off on the same course, though some still mapped out their own path on the park trails.

Instead, the hosts livestreamed the event on the Run for Food Chico Facebook page as they stood at the headquarters of Golden Valley Bank, the main sponsor of the run. Participants were encouraged to “5K Your Way,” by finding their own routes to complete their runs and walks in a safe and socially-distanced manner.

Some participants began checking in on the livestream just after 8 a.m., sharing where they would be running from. Some stayed local in Chico, either running through their neighborhoods or at places like DeGarmo Park, the Chico State University campus, and yes, even Bidwell Park.

But this year was also unique in that people were joining in the event from cities, counties and states away from Chico. According to organizers, Washington, Oregon, Pennsylvania, Kansas, Colorado, Minnesota, Nevada, Texas, Wisconsin, Idaho, New Mexico, Arizona, Washington D.C. and Canada were all represented by people taking part in the event.

At 9 a.m. sharp, Randy and Monica Zachary were joined at the virtual starting line by Laura Cootsana, executive director of the Jesus Center, and Mark Francis, president of Golden Valley Bank. As they attempted to pull the airhorn to signal the beginning of the race, it froze and let out a faint sound. Perhaps it was 2020 in a nutshell.

But the event was also representative of people making the best of a difficult situation and raising money for the Jesus Center, located at 1297 Park Avenue, which typically houses more than 100 people experiencing homelessness, serves them food and offers a number of other services.

To make the event work, organizers and volunteers held a drive-through registration event earlier in the week where people could pick up their packets, including a shirt, bib number and a two-sided sign with the words “start” and “finish.”

Click here to see this page in the eEdition: